go back to Pro Silva Italia 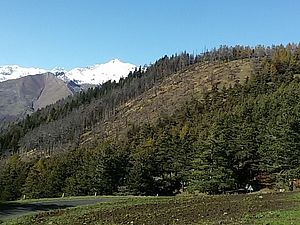 Pro Silva Italia has started a collaboration with the French Association Reforest'Action in order to carry out a reforestation project in the wooded areas affected by fire in the municipality of Mompantero (Turin).

Reforest'Action, French leader in reforestation from private funds, promotes reforestation projects both in France and internationally, thanks to a wide network of partners, including numerous nurserymen, experts and forest managers. The projects implemented aim to perpetuate the multifunctionality of forests and contribute to their adaptation to climate change.

Following the first contacts between Pro Silva Italy and Pro Silva France, the Mompantero area has been identified for the implementation of a Reforest'Action project in Italy.

The area was the subject of an excursion of the North West Section in 2019, on the theme "Wooded areas affected by the 2017 fires: extraordinary plan and restoration interventions".

During the first meeting held on Friday 6 March at the headquarters of the Consorzio Forestale Alta Valle di Susa (a member body of our Association) the Director of the consortium Alberto DOTTA and the Department of Agricultural, Forestry and Food Sciences of the University of Turin (DISAFA - Prof. Matteo Garbarino, Dott. ssa Roberta Berretti , Dr. Giulia Mantero) presented the reality of the fire district through the methodology and the results of the work carried out in the "Extraordinary plan of the restoration of the territory affected by forest fires in autumn 2017" of the Piedmont Region. 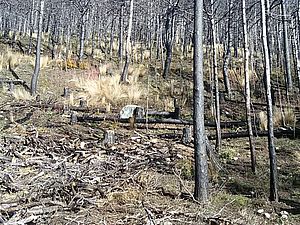 The project involves active reforestation activities and silvicultural interventions aimed at promoting natural forest regeneration. A surface area affected by fire of about 16 ha was identified as high priority area for intervention based on the high severity of fire, the direct protection function and the high extension (no seed producers’ trees within a radius of 180-200 m), and it was therefore selected to carry out active reforestation interventions.

The reforestation activities in particular will include:

The silvicultural interventions aimed at promoting natural regeneration will be carried out on a surface area of about 12 ha, and will include:

The planting of the seedlings will be carried out by the Forestry Consortium and will take place in autumn 2020 according to different schemes and methods in order to test different reforestation techniques, which will be subsequently evaluated through the monitoring that DISAFA will carry out in the following 5 years, in agreement with the Forestry Consortium and Reforest'Action.

Pro Silva Italia will supervise the project by participating in the design activities thanks to the contribution of the members who have gained experience in the field of reforestation of mountain areas. The total cost of the project amounts to 100,000 euros. 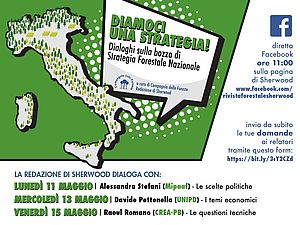 Pro Silva Italia had to postpone their excursions. Instead they are not paralized but invite their members to participate in the developement of the new forest strategy in Italy

The invitation was made at the beginning of April to participate in the distance meetings organized by the Compagnia delle Foreste, in order to deepen the contents of the draft of the NATIONAL FORESTAL STRATEGY, published at the end of April.

This is an important document, which seeks to take into consideration all aspects of the forestry world. President Mauro Frattegioani shares the opinion expressed by a colleague - a member of Pro Silva Italia - who sees in this document a historic change in the approach of national forestry policy, moving from a prevailing concept of constraint to a management perspective, in harmony with the approach of the Legislative Decree. 34/2018.

For this reason they invited everyone to participate in the initiative of the Compagnia delle Foreste.

As the Board of Directors of Pro Silva Italia they were examining the document and were looking forward to possible observations on the issues that are of most interest to the members, but they would like to widen the debate also to all members, through the forum on our website.

A big greeting to everyone, hoping to meet again soon in the woods.
Mauro Frattegiani, President Pro Silva Italy

DIALOGUES ON THE DRAFT NATIONAL FORESTRY STRATEGY - Let's have a strategy!

The new Italian National Forest Strategy (SFN) is in consultation until May 28th. To find out more, some of the people who have contributed most to the draft will be interviewed. So we organized 3 interviews of 45 minutes, in the form of a webinar, with ALESSANDRA STEFANI, DAVIDE PETTENELLA and RAOUL ROMANO.

The interviews can be followed live on Facebook and it will also be possible to propose, already today, questions for the interviewees.

If you don't have time to send questions in advance, you can do so live via Facebook chat. One of us will select a few of them, perhaps making a summary of the many that will arrive, and will put them to the interviewee on duty.

A video produced by Compagnia delle Foreste with the collaboration of Giorgio Vacchiano (Pro Silva Italia).

A month after the storm Vaia, which hit the eastern central Alps provoking thousands of hectares of windfalls in the forests of Veneto, Trentino Alto Adige, Lombardy and Friuli Venezia Giulia, Compagnia delle Foreste presents a video dedicated to the territories injured by Vaia storm.

The video was made in collaboration with Giorgio Vacchiano, member of Pro Silva Italia and researcher at the University of Milan, recognized in 2018 by the prestigious journal Nature as one of the 11 scholars in the world able to "leave their mark".

The film starts from a book of vintage photos dating back to 1917, which shows the extensive clear cuts that, during the First World War, were made in the Casentino Forests (Tuscany), now National Park and territory recognized as one of the most beautiful in Italy. The protagonists return to the places immortalised by vintage photos to show how, one hundred years after those events of great impact, the forest has returned.

Some of the vintage photographs strongly recall images of windfall collapses in the North-East italian regions. Hence the parallelism with the current emergency situation of the alpine forests, which need to be reconstituted by professionalism able to restore them and then manage them better, in the context of climate change.

A hope message for the affected areas: if we invest well today, we are sure, the forest will return better than before. 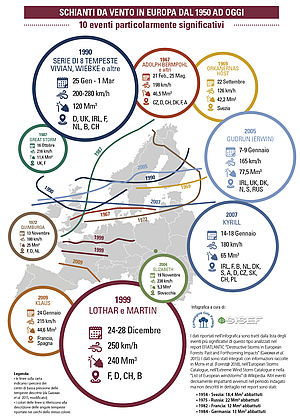 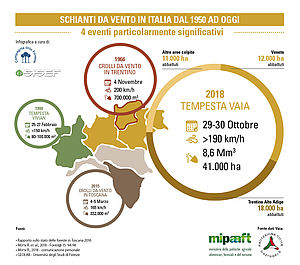 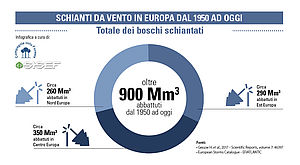 Here we also present some infographics on forest storms in Europe and Italy in the last decades, made by Compagnia delle foreste (www.compagniadelleforeste.it).

The video has been patronaged by numerous associations and organizations in the forest and environmental sector as: 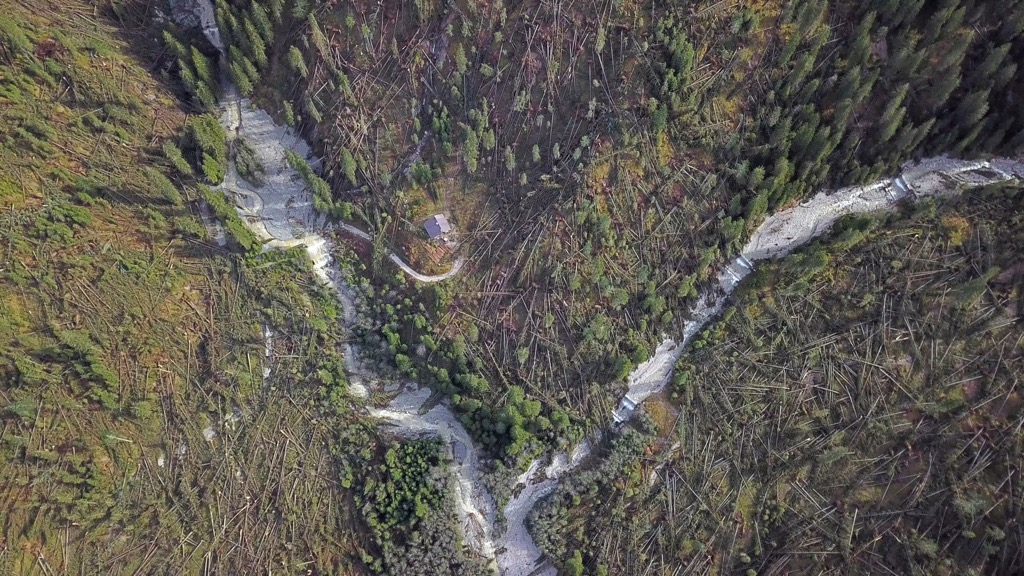 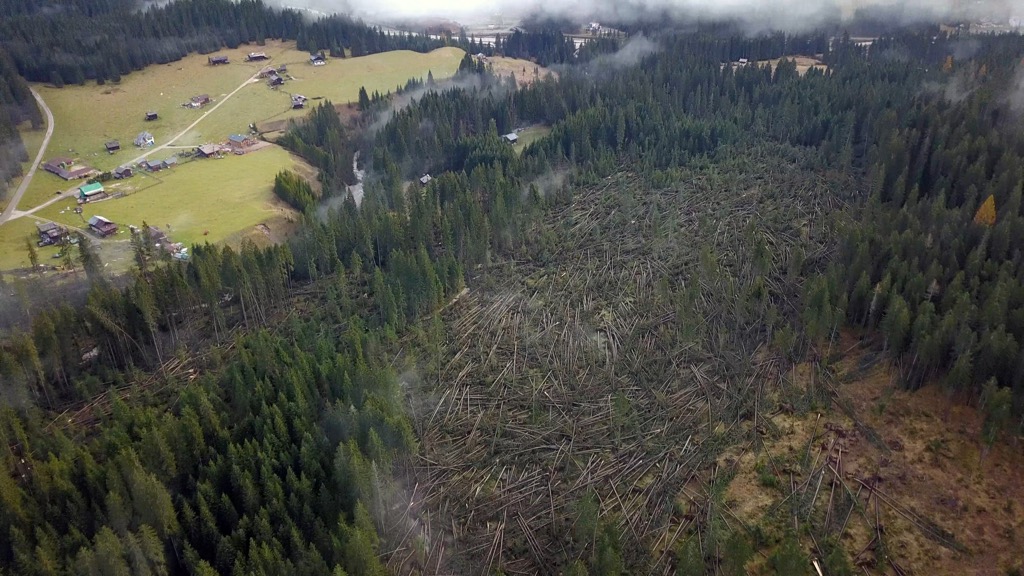 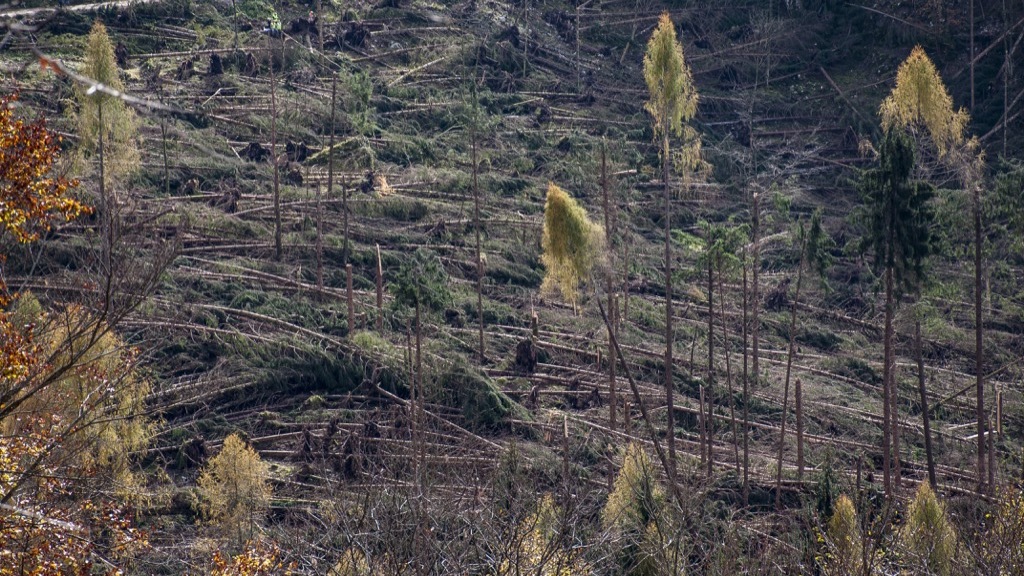 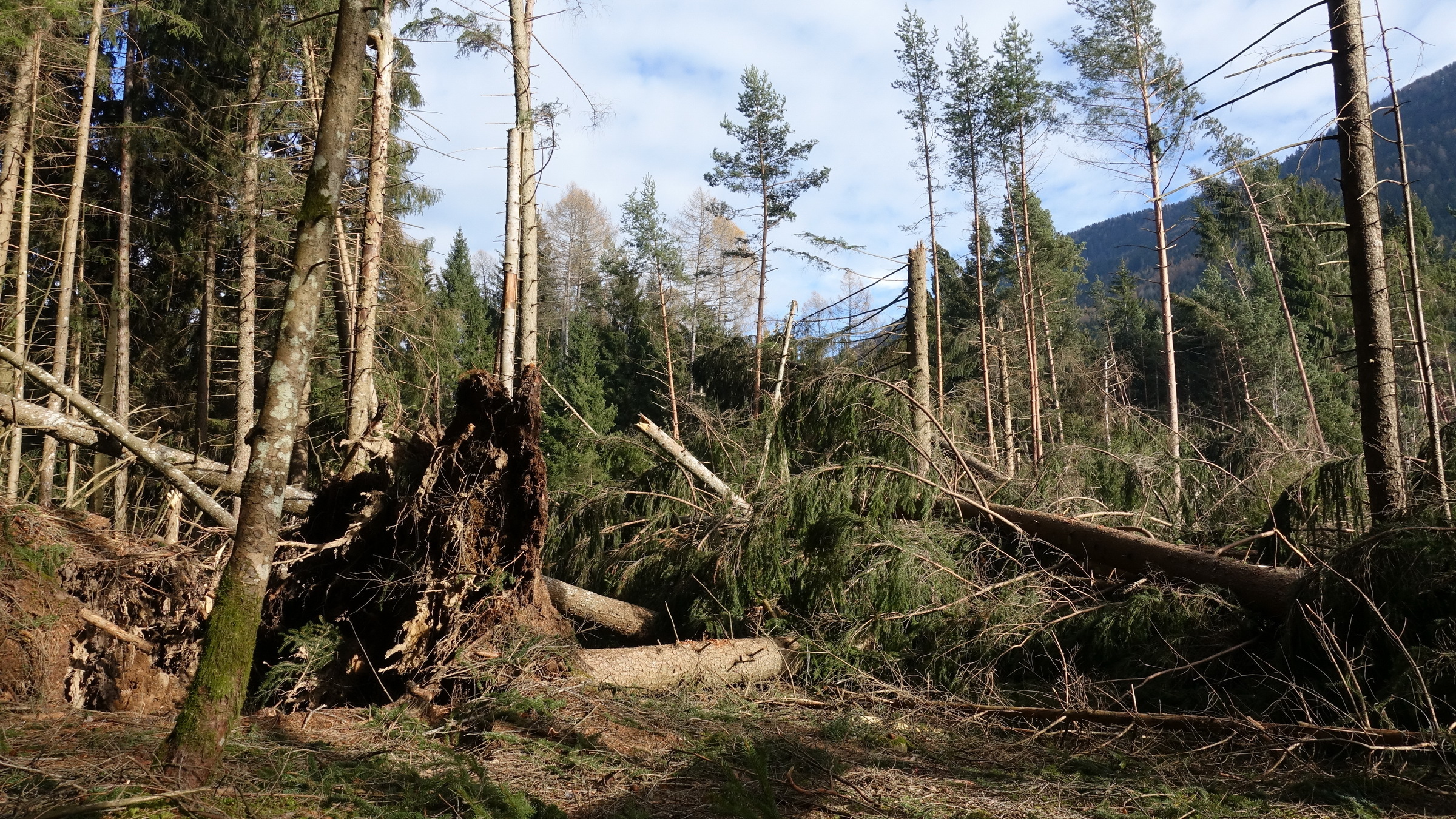 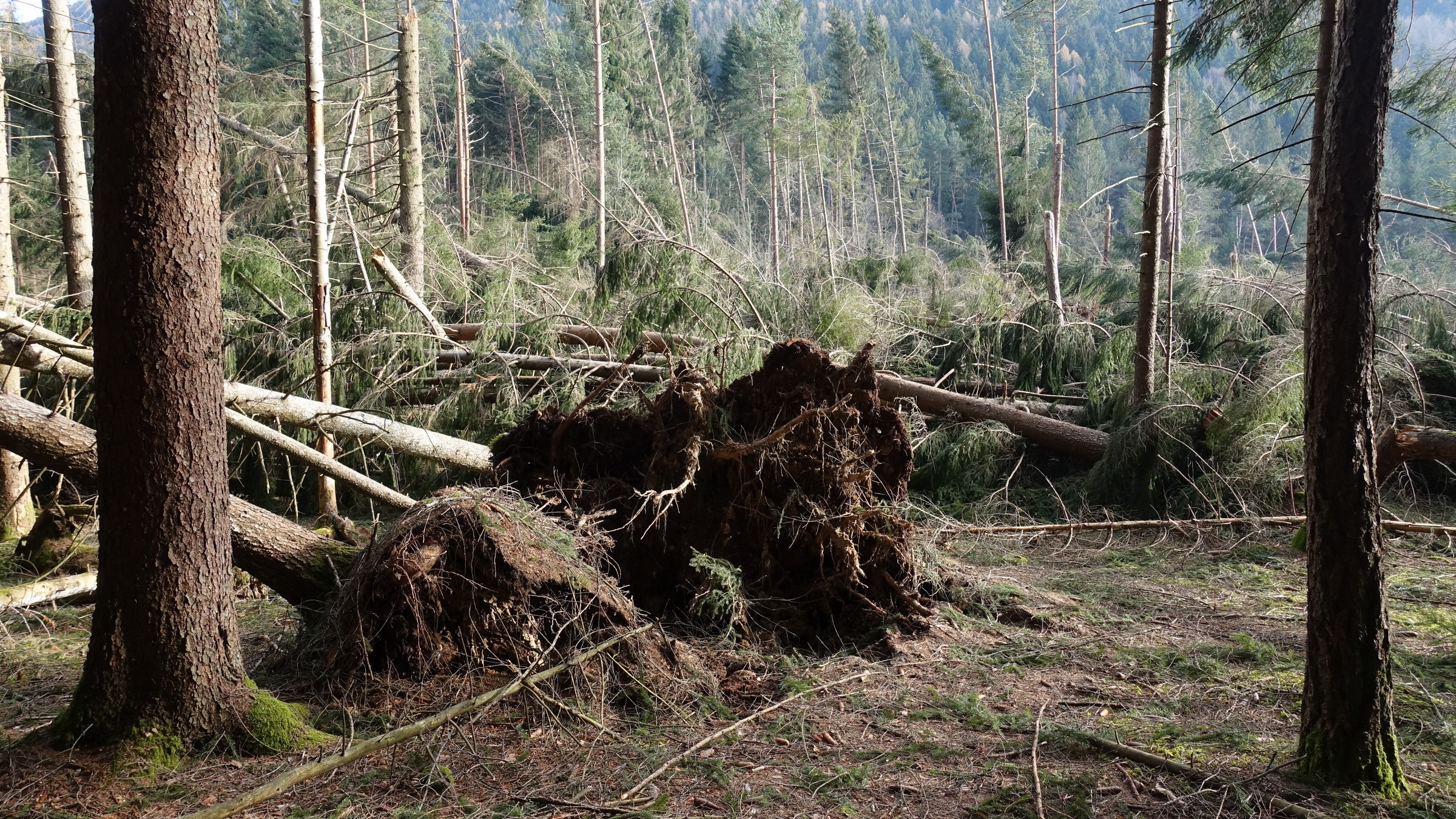 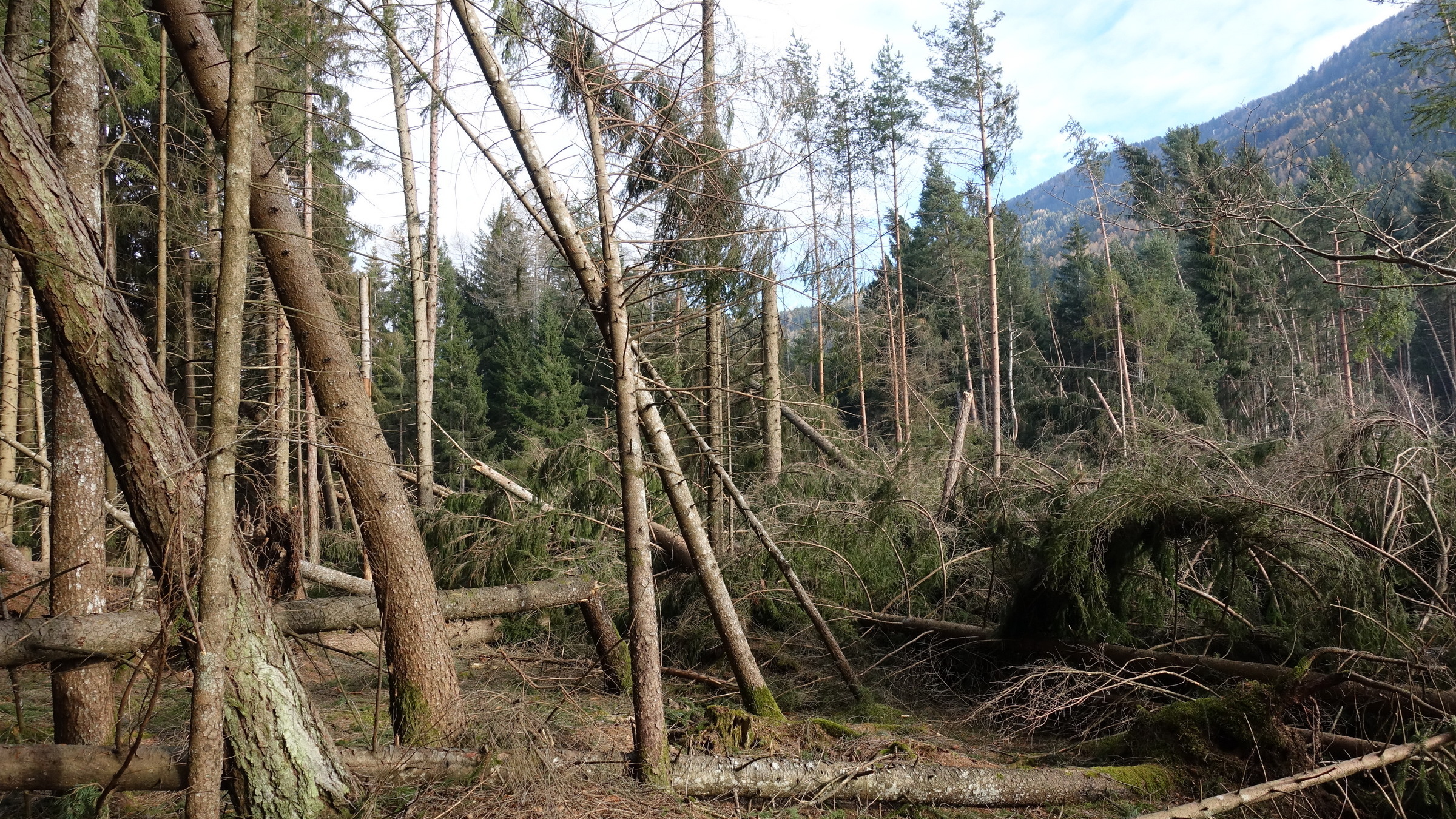