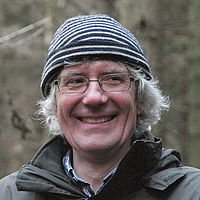 Phil Morgan has pursued a varied career in forestry that first took him to France where he worked in state and community woodlands before reading for a degree in forestry at Aberdeen University. He worked as a forest surveyor in the tropical rainforests of Brunei, then as a forest manager for Tilhill Forestry in the Scottish Borders that led him to become the Shotton Paper Company Area Forest Manager in Wales.

He now combines consultancy work and the management of woodlands in Wales through his own company Sustainable Forest Management and through a trading co-operative called SelectFor. He is a specialist in continuous cover forest management and close to nature forestry. He has a wide client base including the Forestry Commission in Wales, large plcs, estates, private forestry investors, farmers, community groups and individuals. He is based in Wales but his work has taken him to all parts of the UK, the Republic of Ireland, France and the USA. He is actively expanding the Association Futaie Irrégulière (AFI) network outside of France particularly in Ireland and in Britain.

As a founding member of the Continuous Cover Forestry Group he has represented the group and travelled to many countries across Europe. He attended the inauguration of ProSilva Ireland at Spanish Point in 2001 and has accompanied PSI on many occasions. He has also assisted in establishing ProSilva Norway in 2008.