go back to Anne Crespin go on to Jonathan Hulson 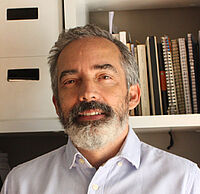 Joao Paulo Fidalgo Carvalho is a professor of Silviculture and Dendrology at the University Tras os Montes Alto Douro, Vila Real (Portugal) since 1988. He has a PhD in Silviculture and made a Post-Doc on the same subject in USA as a Fulbright Scholar (USDA Forest Service SRS and North Carolina State University). Member of the Centre for the Research and Technology of Agro-Environmental and Biological Sciences (CITAB).

He has been working on close-to-nature in several countries, after its first contact in Germany (1996). Delegate member of Pro Silva since 2001. Has developed activity linked to Pro Silva on several occasions, in Portugal and abroad, and developed contacts with Portuguese-speaking countries.

Scientific consultant in EC Commission Working Group on Forests and Nature (ENV-Forest Protection) for the development of Closer-to-nature forestry framework and guidelines under the EU Biodiversity Strategy to 2030. Part of the institutional Working Group for the National Strategy for Adaptation to Climate Change for Forests (PT).

Joao Carvalho is president and founder of Pro Silva Portugal.